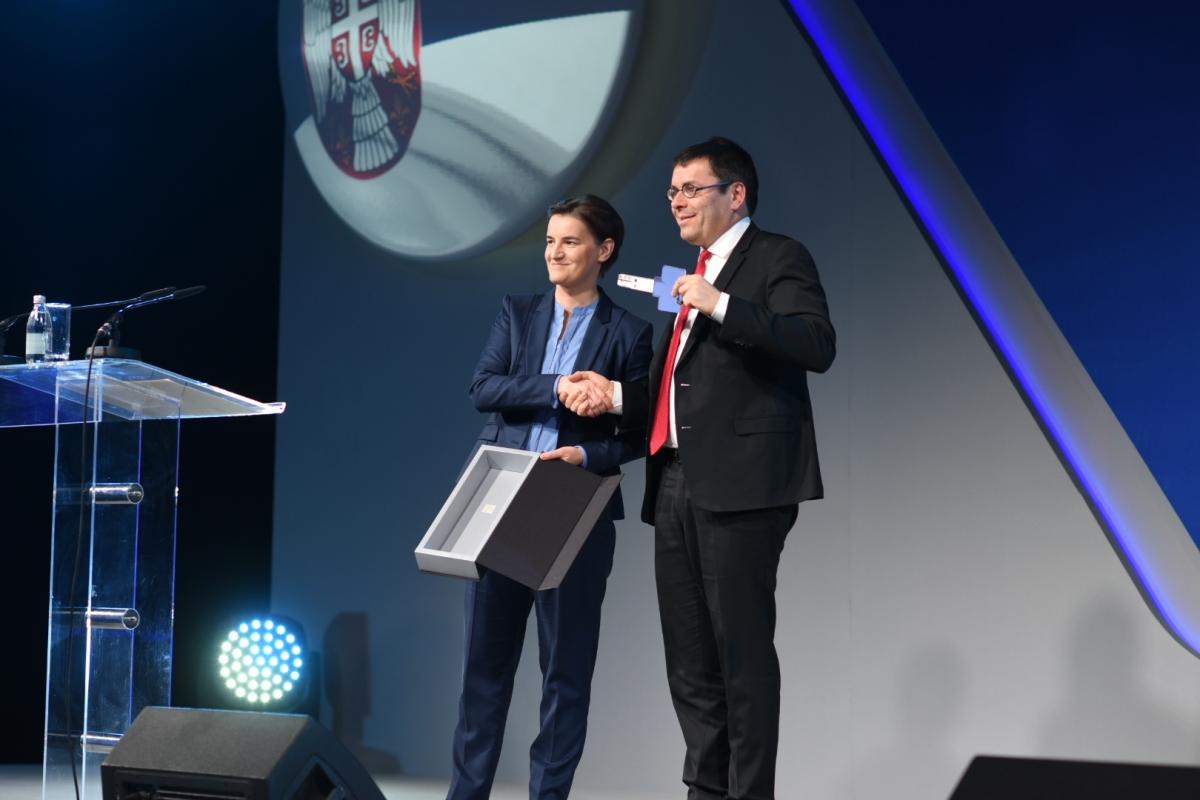 VINCI Airports celebrates the start of its operations in Serbia

On February 13, 2019, VINCI Airports celebrated the start of its operations in Serbia and the beginning of its 25-years concession of Nikola Tesla Airport, in the presence of Ana Brnabić, Prime Minister of the Republic of Serbia, and Nicolas Notebaert, CEO of VINCI Concessions and President of VINCI Airports, along with representatives of the diplomatic corps and the business community.

Entitled “Illuminating Your World” in reference to both Nikola Tesla’s legacy and VINCI Airports’ slogan “Opening Your World”, the event featured speeches, animations and videos celebrating VINCI Airports and Serbia’s joint commitment to making the airport a modern reflection of the future Serbia, in order to support the country’s development as it connects to the rest of the world.

In his speech, Nicolas Notebaert, CEO of VINCI Concessions and President of VINCI Airports, said: “We strongly believe in the potential of this airport. That is why, over the next 25 years, we hope to act, under the public authorities’ leadership as a reference partner to Serbia’s national economy, to consolidate the position of Nikola Tesla as the leading airport in the Balkans region.”

To achieve this ambition, he notably announced an investment plan of more than €730 million over the course of the concession to upgrade and modernize the airport and an objective to bring the 5 million passengers currently welcomed every year to 15 million by the end of the concession.

“We will develop the traffic, but we will do it smartly and sustainably” he added, noting that VINCI Airports’ commitment to sustainability will allow making Nikola Tesla Airport an exemplary company in terms of social responsibility, “through the reinforcement and empowerment of safety and security standards, and by making the airport a reference in Europe for environmental performance.”

Symbolically handing over the keys of the Airport, Prime Minister Ana Brnabić stated that this project was of strategic importance for further development of Serbia. “This is the first concession in the history of our country, and VINCI Airports is a partner who will improve our airport’s operations with their know-how, experience, references, and resources,” Brnabić stressed.

In her address, the Prime Minister added “3.4 million passengers transited through Nikola Tesla Airport in 2012, and owing to the partnership with Etihad and Air Serbia, the Airport served as many as 5.6 million passengers at the end of 2018. This growth is the result of great effort, changes and faith in our country’s potential and VINCI Airports is the strong partner for further, faster and more sustainable growth of the airport.”

She concluded, “With this partnership, we were opening new doors for Serbia, through a project symbolizing a modern and an innovative Serbia, connected to the world.”