At the beginning of 2020, the company BELGRADE AIRPORT started works on the modernization and expansion of Belgrade Nikola Tesla Airport. Most of the works will be completed during 2023. Currently, works are being carried out at several locations, which include the expansion of the terminal, eco facilities, as well as new access roads and additional car parking spaces.

The extension of the Pier C

The newly built part of the existing terminal at Belgrade Nikola Tesla airport is open for operations on April 12 increasing the airport capacity, passengers’ comfort and process efficiency. With a surface area of 13.600 m2 it provides additional 8 contact gates with boarding bridges and 5 gates for remote aircraft stands totaling to 19 gates on terminal C side. The entire new area has been designed in line with the best practices and standards of VINCI Airports company, in terms of materials, colour palettes, signage, equipment and other architectural and interior design elements. In parallel with this terminal expansion, the works on the first phase of the apron C extension of almost 27,000 m2 were completed, with 4 completely new positions for aircraft parking out of which one is for the wide body aircrafts.

By achieving this major milestone many improvements are introduced at Belgrade Nikola Tesla Airport for the 1st time: open space boarding gates concept is achieved thanks to the new centralized security systems now positioned in front of the passport control, additional roof corridor enables segregation of the departing and arriving passengers, and travellators are placed to ease and speed up the passenger’s movement. 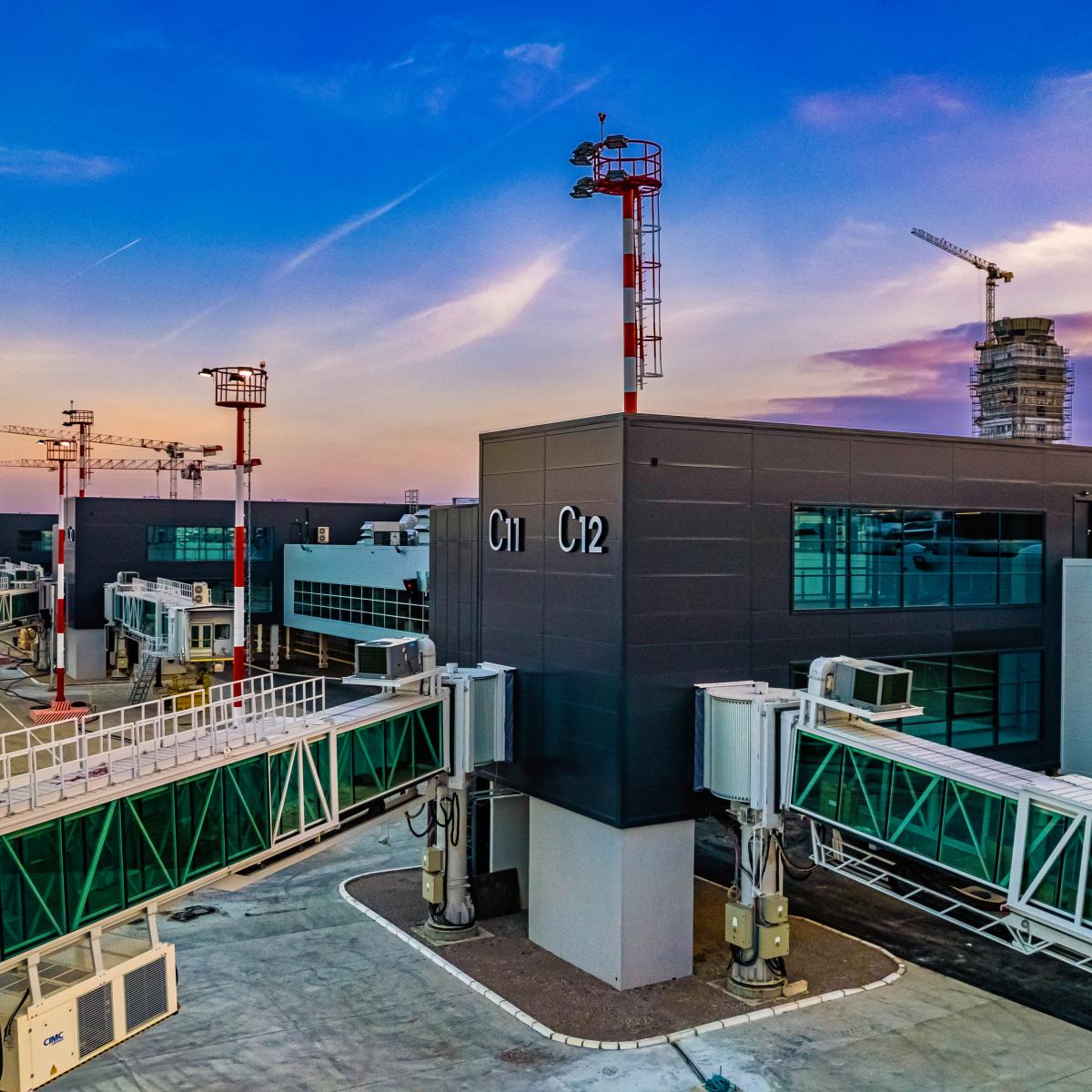 Expansion and reconstruction of the terminal building

The expansion of the Pier C is part of a large project of reconstruction and expansion of the entire existing terminal building. Works on building more than 92,000 m2 of new space are underway and will include centralized security control, additional check-in counters, number of new facilities for entertainment and relaxation of passengers, as well as new catering and commercial spaces, while passengers landing in Belgrade are already passing through a partially expanded arrivals section with a new customs control area.

Extensive work in Terminal 2 is being carried out in phases, first in the arrivals area, on the ground floor and on the first floor in the area in front of the passport control. Works on the renovation of passenger waiting areas on the Pier A and C are also in progress, as well as on the new, additional roof corridor, which will enable the separation of arriving and departing passengers within the entire terminal building.

The modernization and expansion of the terminal building includes a complete reconstruction of the interior, an increased number of check-in counters and additional space for new restaurants, bars and shops. 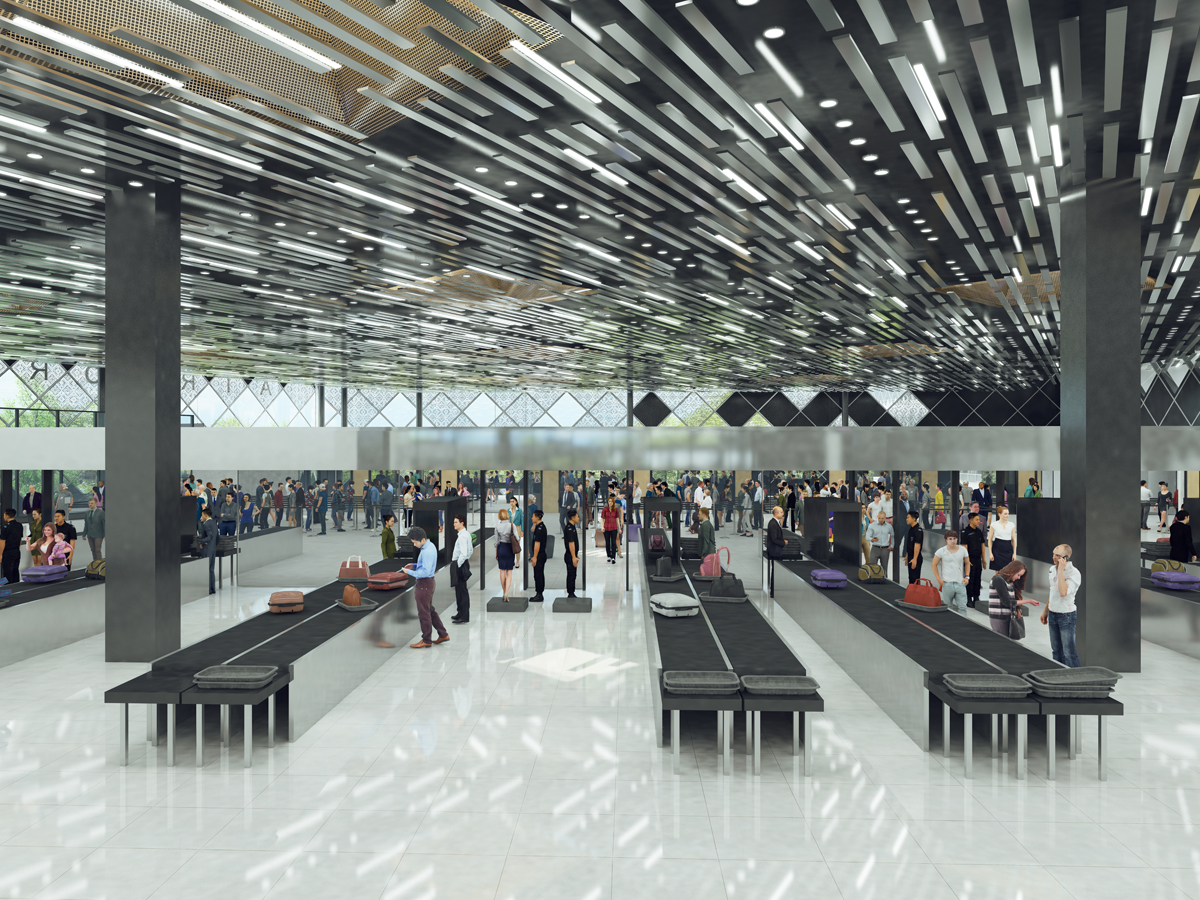 These works include complete reconfiguration, upgrade and improvement of access road system in front of the passenger terminal which will enable faster access and more efficient traffic flow for passengers and visitors, and will increase the capacity for short-term and long-term parking of vehicles. Parking lots will be equipped with LED lighting system, chargers for electric vehicles, there will be “Premium parking spaces” available as well as additional parking spaces for passengers with reduced mobility. This will significantly improve quality of service, comfort and accessibility. The works will be performed in phases, and it is expected that the access roads and parking lots at Belgrade Nikola Tesla Airport will have the new appearance completed by the end of 2022. 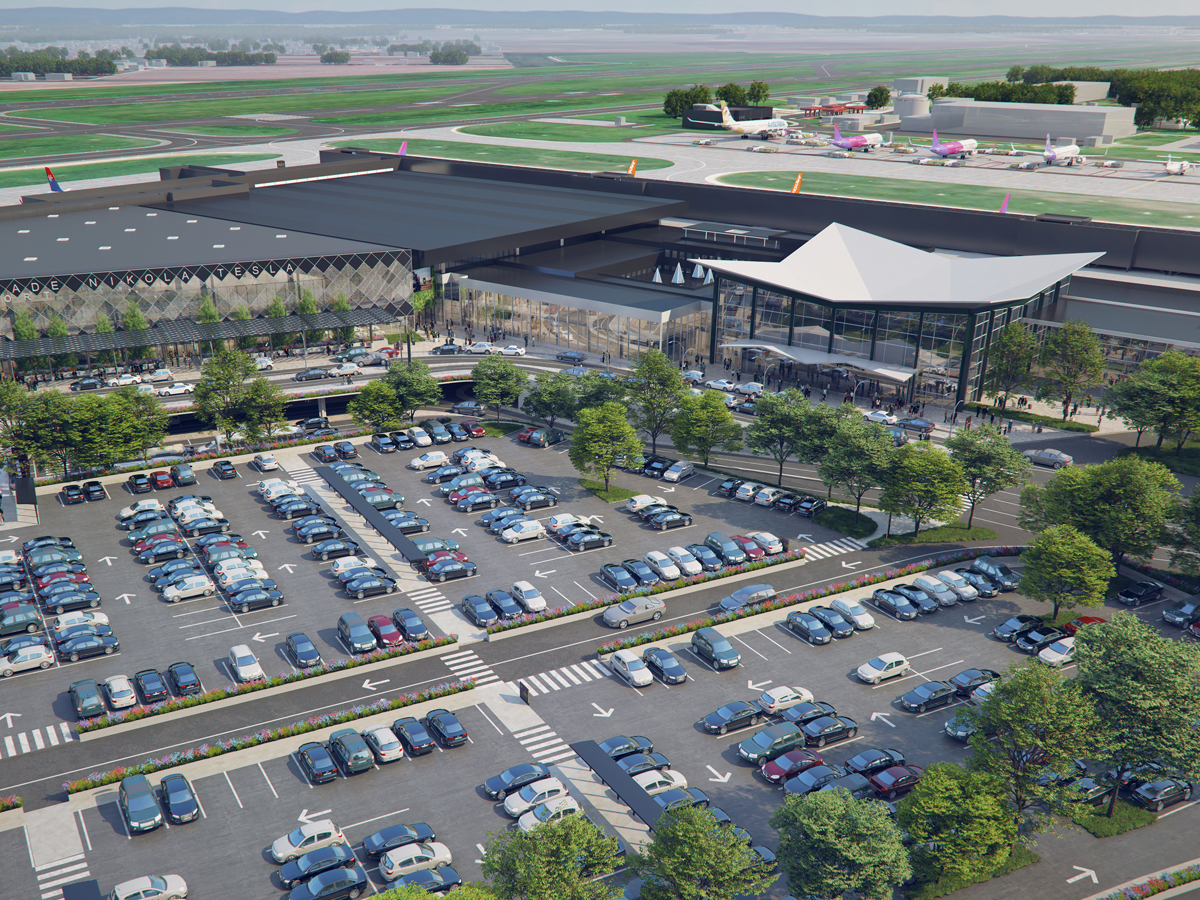 In the previous period, a new Apron E was built, which represents the first phase of the aprons’ expansion works and includes construction on an area of nearly 25,000 m2. The expansion has enabled modernization and optimization of aircraft handling capacity at the remote parking positions, providing the configuration of three parking positions for aircraft with a wingspan of up to 36 m, as well as an internal road and areas with ground handling equipment. The apron is equipped with its own lighting and drainage system. This will significantly increase the parking capacity, enabling a larger number of aircraft to be parked at the same time.

Additionally, the upgrade and reconfiguration of the Apron B has been completed. Apron B has been expanded by additional 11.000 m2, and its capacity has been increased from 7 parking positions for C-code aircraft, to 10 parking positions for C-code aircraft and 1 dependent parking position for larger E-code aircraft. Drainage of wastewater and atmospheric discharge from the extended apron B is directed towards the existing, but also the newly built network of sewage. Lighting on the apron B is provided from the existing as well as from new light poles, both equipped with new LED reflectors. 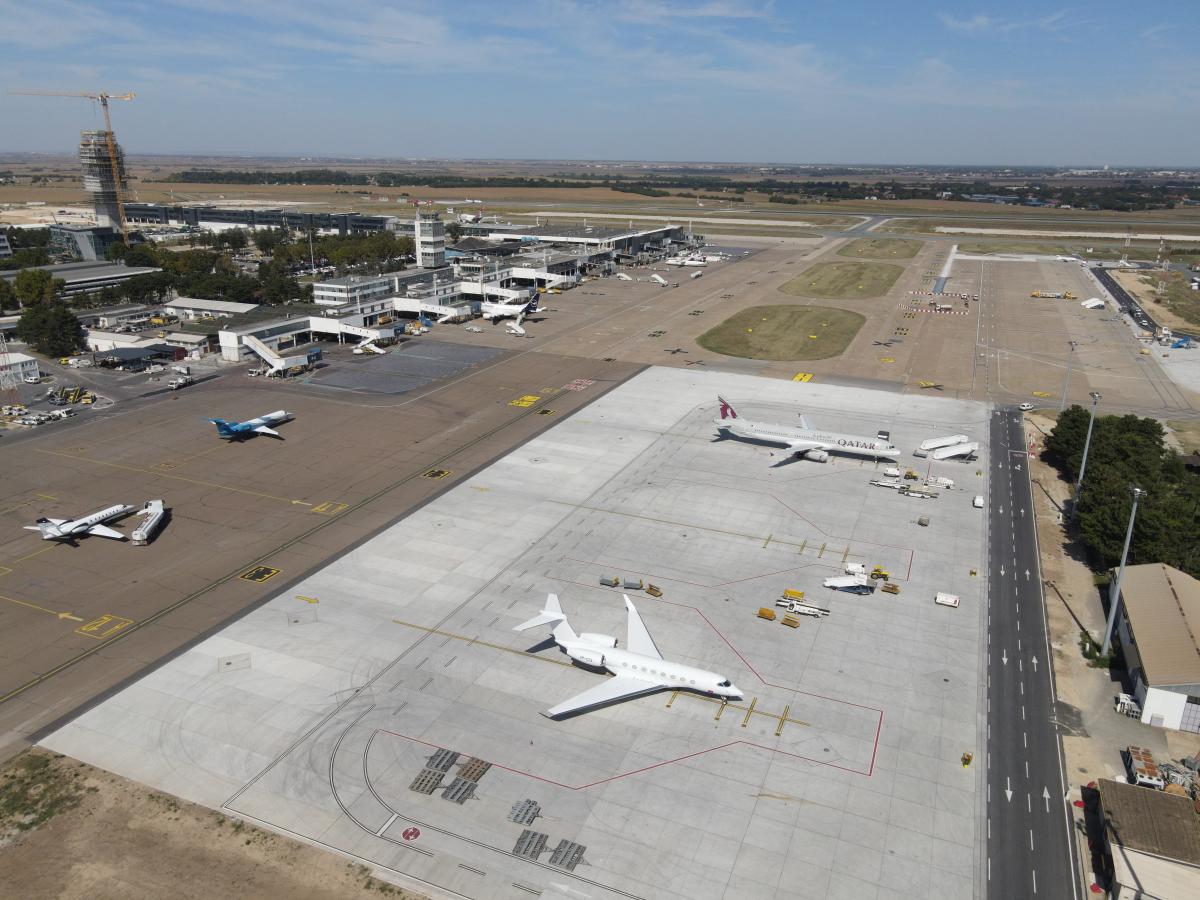 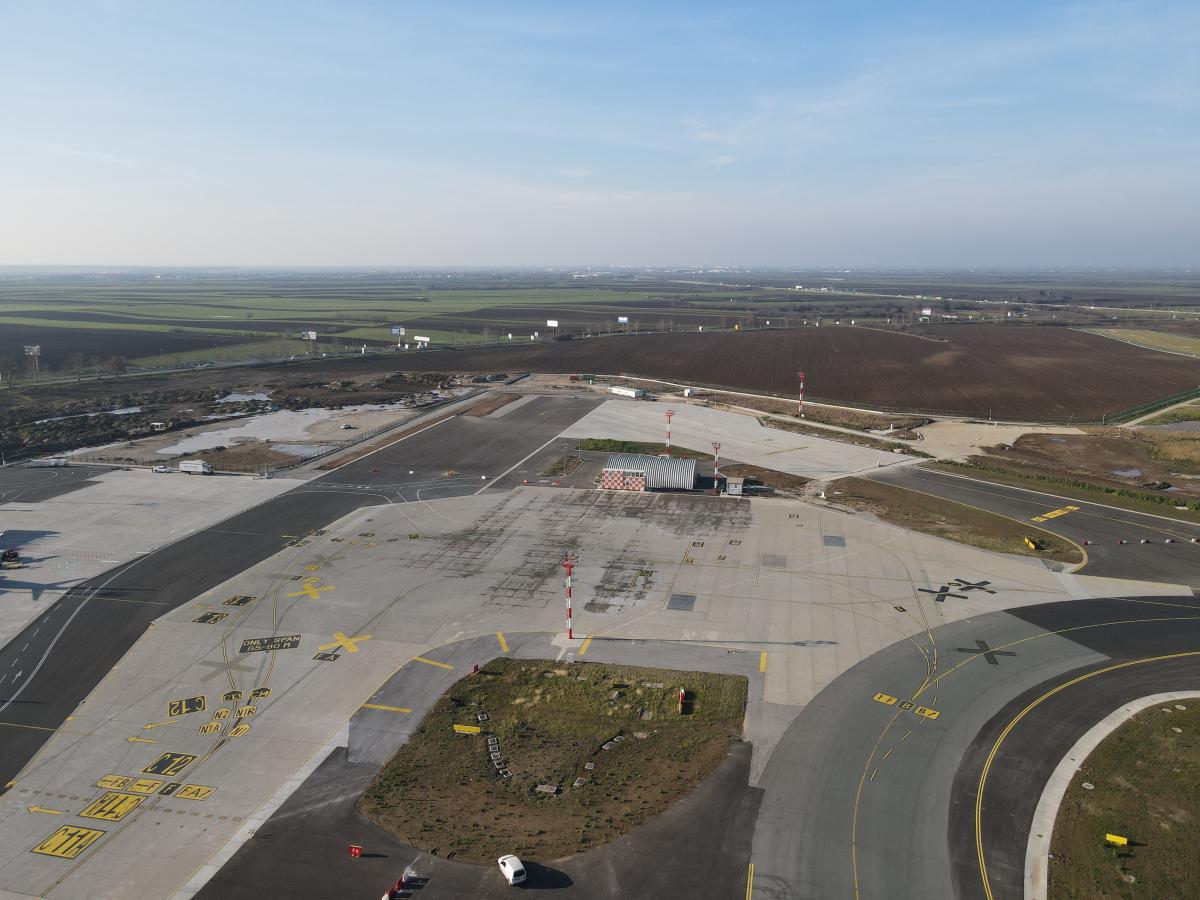 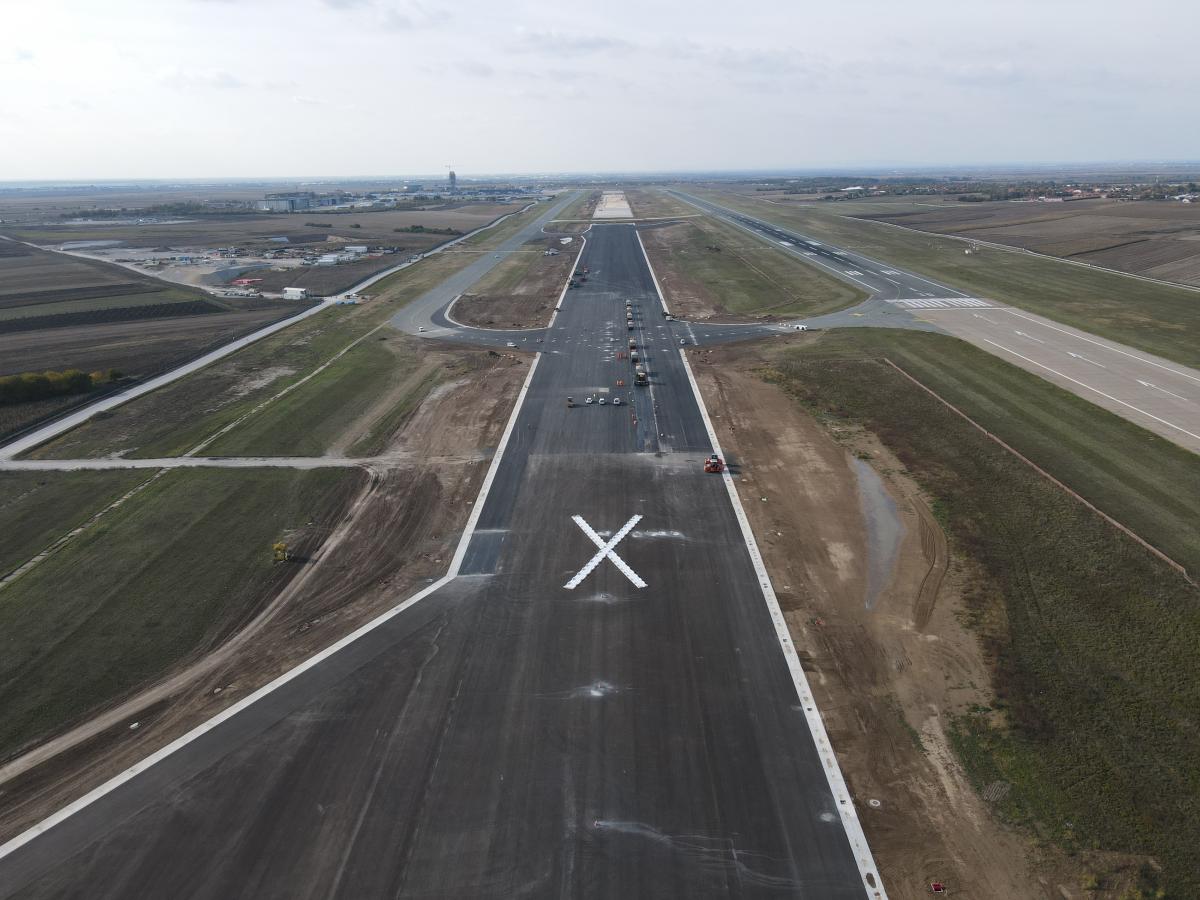 In the previous period, a new and modern additional parking lot was built east of the cargo terminal on an area of 36.400 m2 in order to expand parking capacity and prepare for future traffic growth at Belgrade Nikola Tesla Airport. The new parking area, named Tesla Parking provides more than 1.500 parking spaces, 798 for the passengers (including parking spaces for people with reduced mobility), 109 for taxi services, 330 for employees and 265 for rent-a-car vehicles. 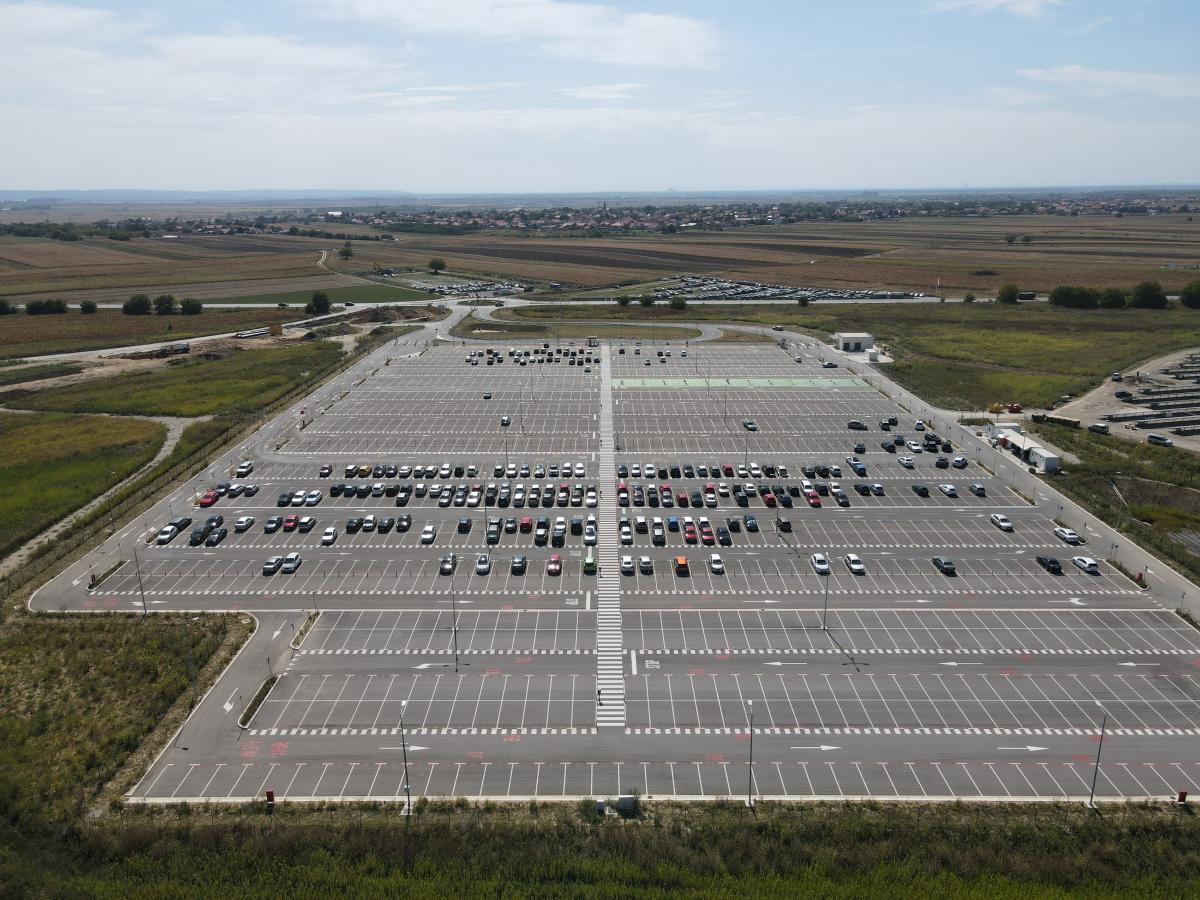 The concession project implies a strong focus on sustainable business, in order to reduce the impact on the environment in terms of emissions of greenhouse gases, water and waste, in accordance with the global policy of VINCI Airports aiming to reach zero emissions by 2050.

At the end of 2021, a new energy plant for the production and distribution of heat and electricity was put into operation. New heating plant is equipped with the state of the art, tri-generation system with total heat capacity of 44 MW.

The advantages provided by the new heating plant reflect in reducing the negative impact on the environment, using less polluting energy sources and transiting from heavy fuels to natural gas. At the same time, the total heating capacity of the airport has been increased by 25 percent, thus meeting the heat needs of not only existing but also future consumers, in line with the planned development of the airport, while reducing carbon footprint by 25 percent, corresponding to reduction of emissions of 3.000 tons of carbon dioxide.

The new power plant, in addition to reducing the impact on the environment, also provides great savings in terms of using available natural resources. 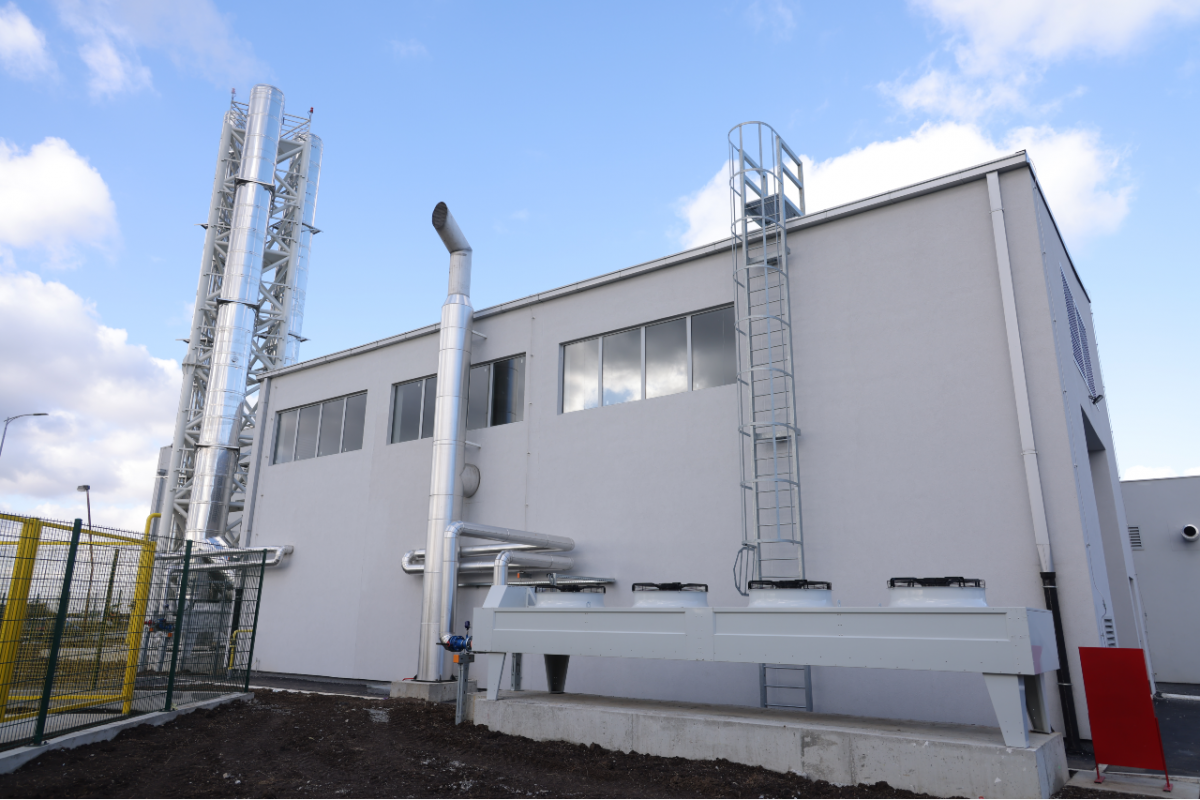 A solar plant that provides the airport with electricity obtained from renewable sources has also been put in operation. The new solar plant will produce approximately 1,130,000 kWh of green electricity annually, which is comparable to the annual consumption of about 430 households. In this manner, the airport’s CO 2 emissions (scope 1 & 2) will be decreased by 900 tons per year.

The solar plant is located near the airport complex, on the road to Surčin, next to the new Tesla car park, and it consists of nearly 3,000 photovoltaic panels spread over a plateau of 15,900 m2 that convert sunlight into electric energy. 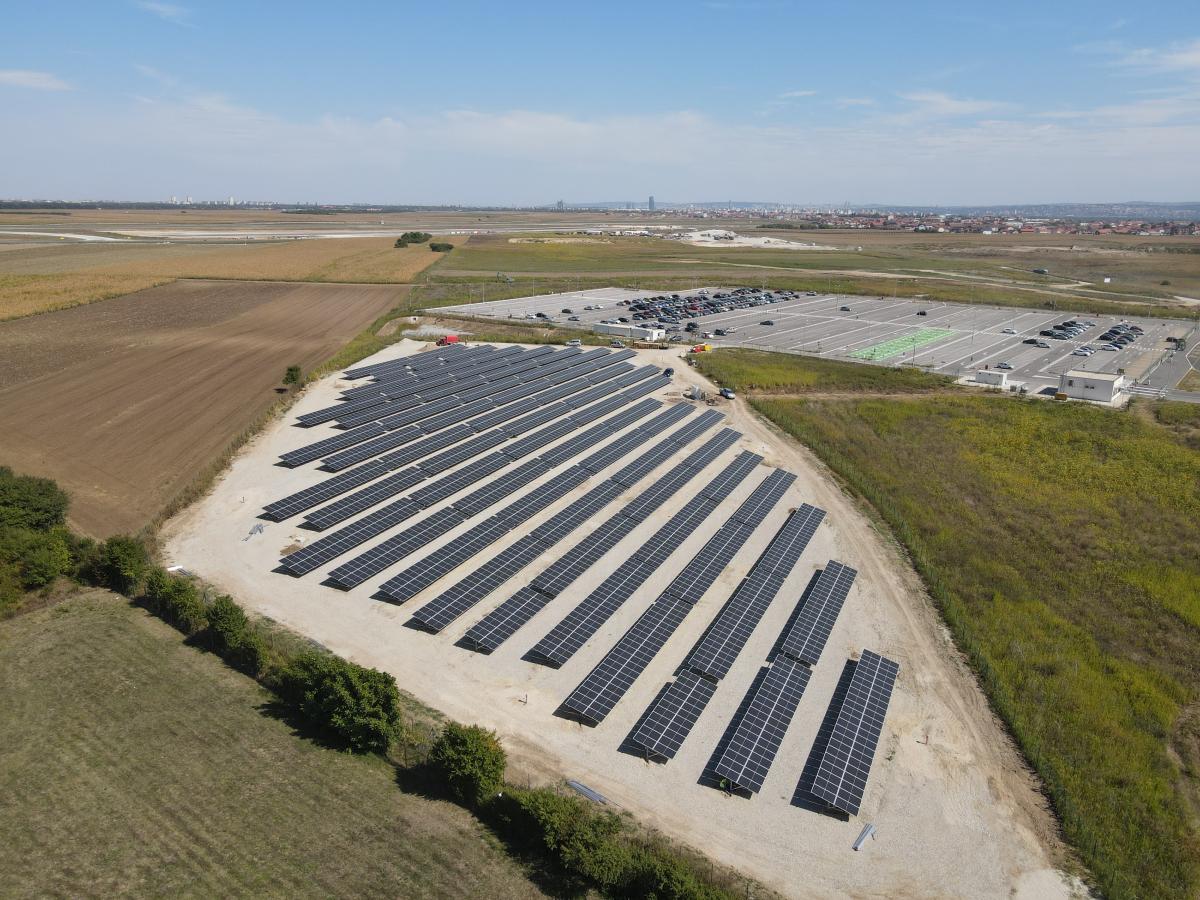 The objective of the newly designed facilities for solid waste treatment is the collection, manual sorting and temporary storage of waste until it is transported to appropriate locations for further treatment and recycling, in accordance with the regulatory framework in the field of waste management.

The construction of a solid waste treatment plant in the public and controlled area of the airport has increased the rate of recycled waste from 5% in December 2020 to 50% in December 2022. 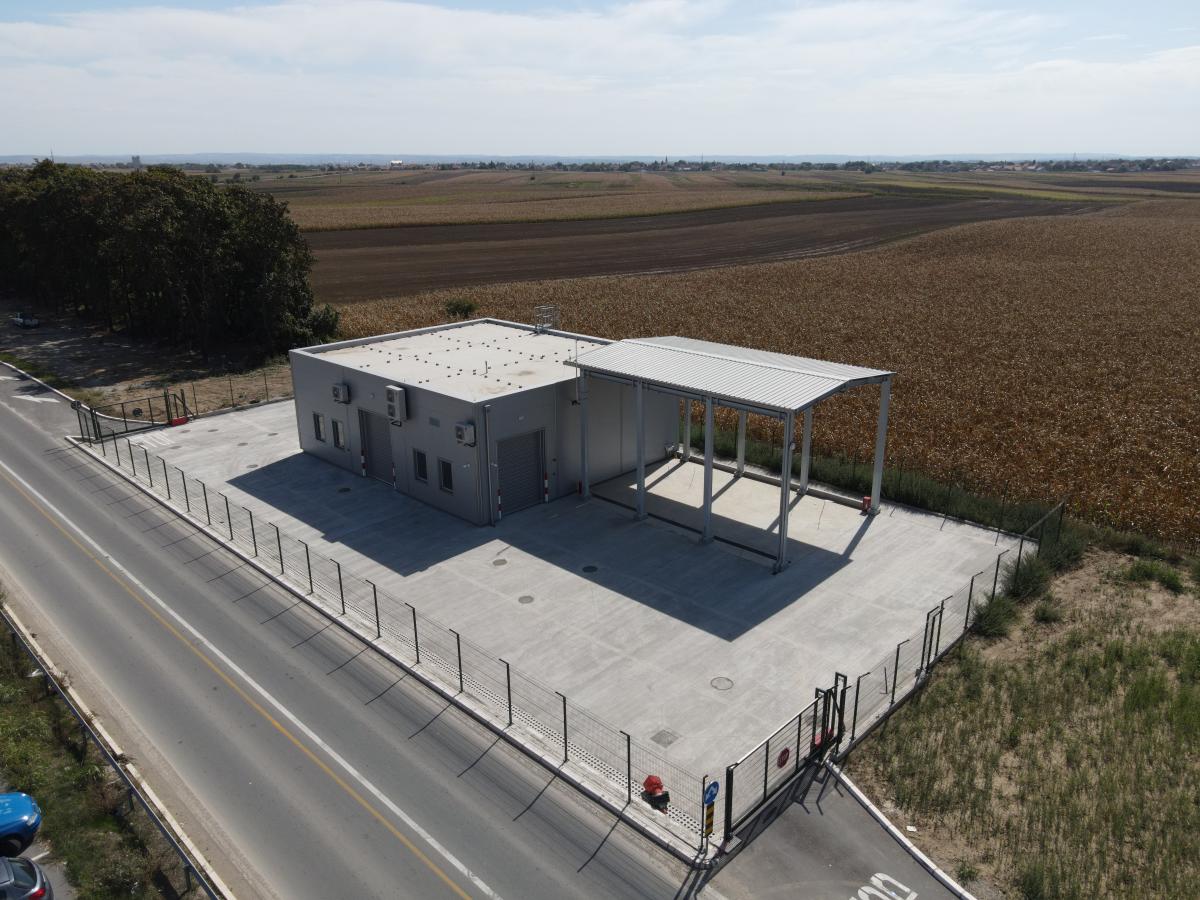 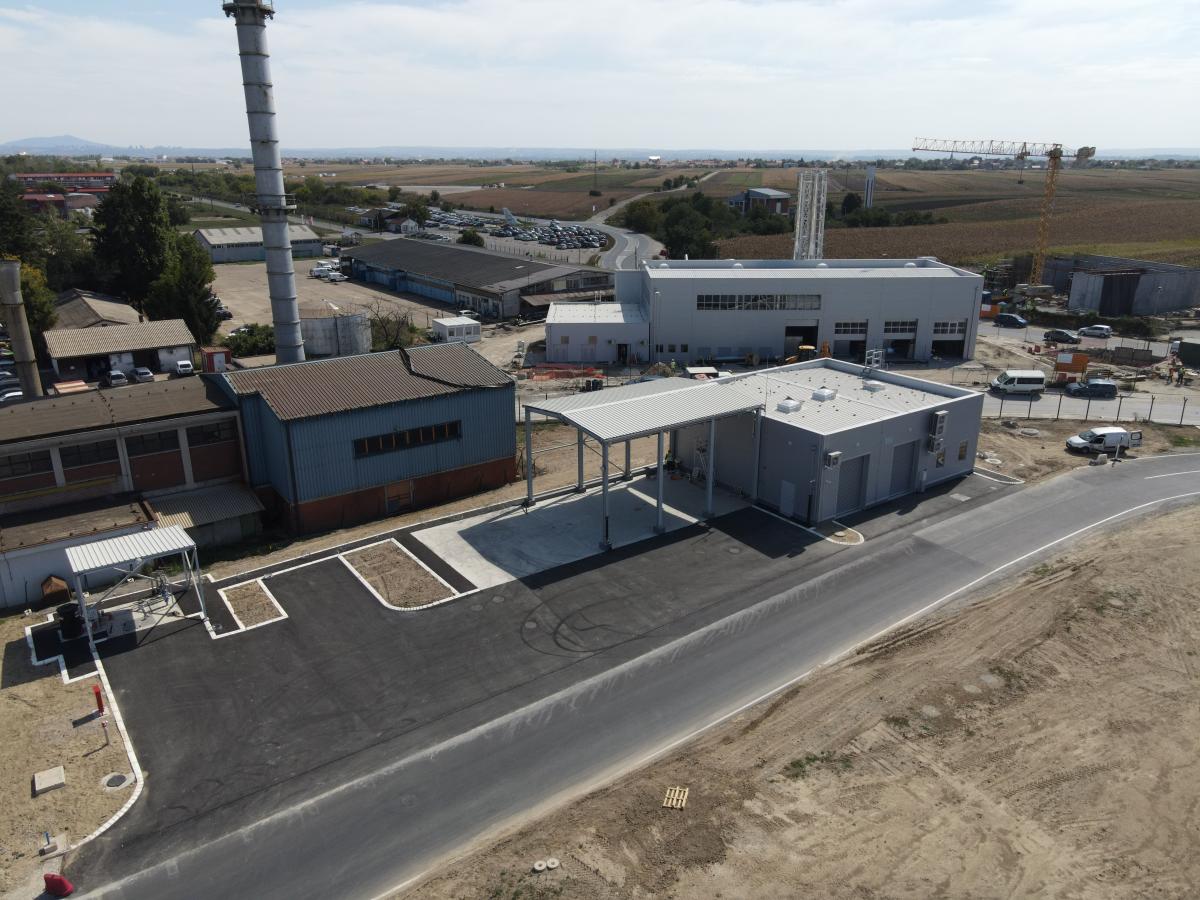 The construction of a wastewater treatment plant with an area of 615 m2 is currently finishing, whereby the treated water will be used for irrigation and for cleaning the streets and asphalt surfaces. This facility was constructed in the southern part of the public area of the airport complex and was designed with the aim of treating wastewater generated by the operations at the airport complex. 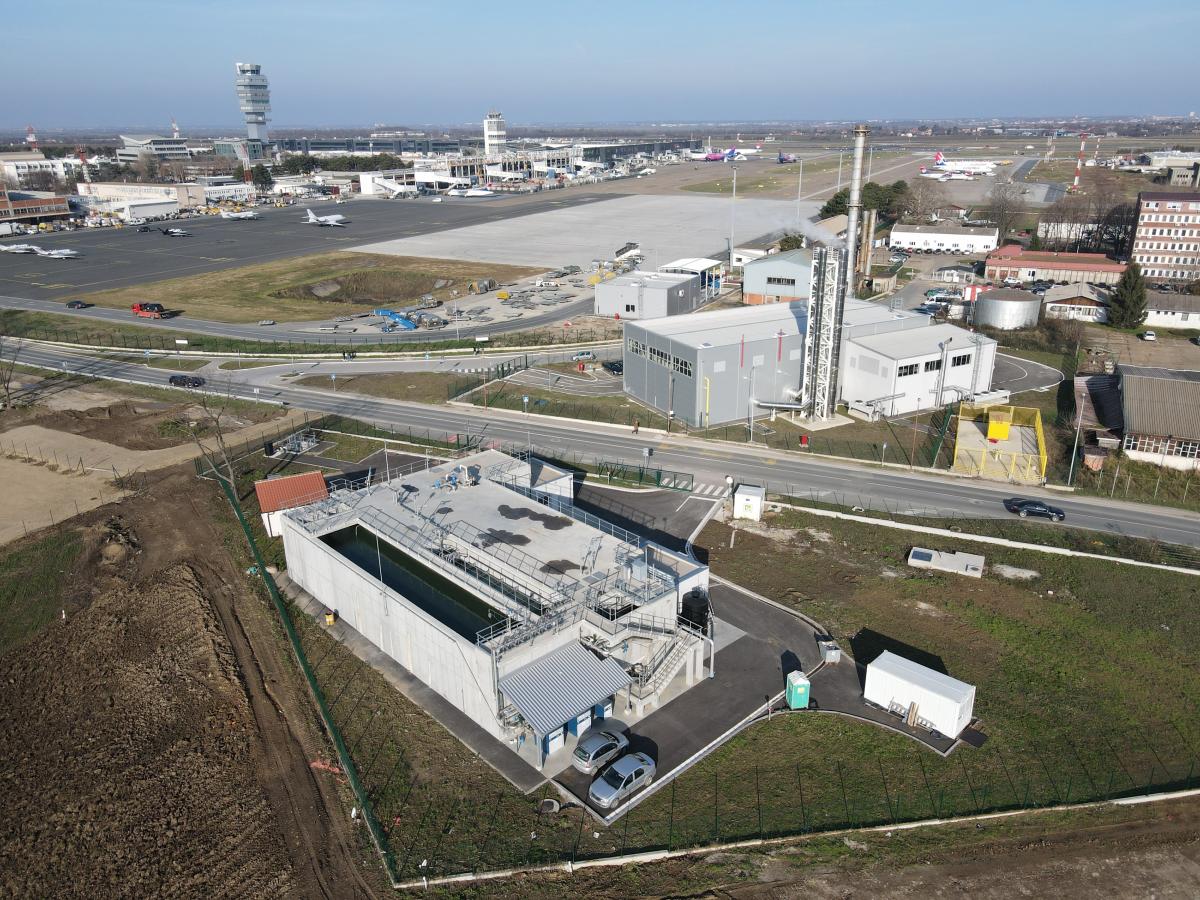 By 2043, BELGRADE AIRPORT will apply to Nikola Tesla Airport, the best international practice of the global operator, its parent company VINCI Airports, which, in addition to Belgrade, manages the operations of more than 65 airports in 12 countries worldwide. 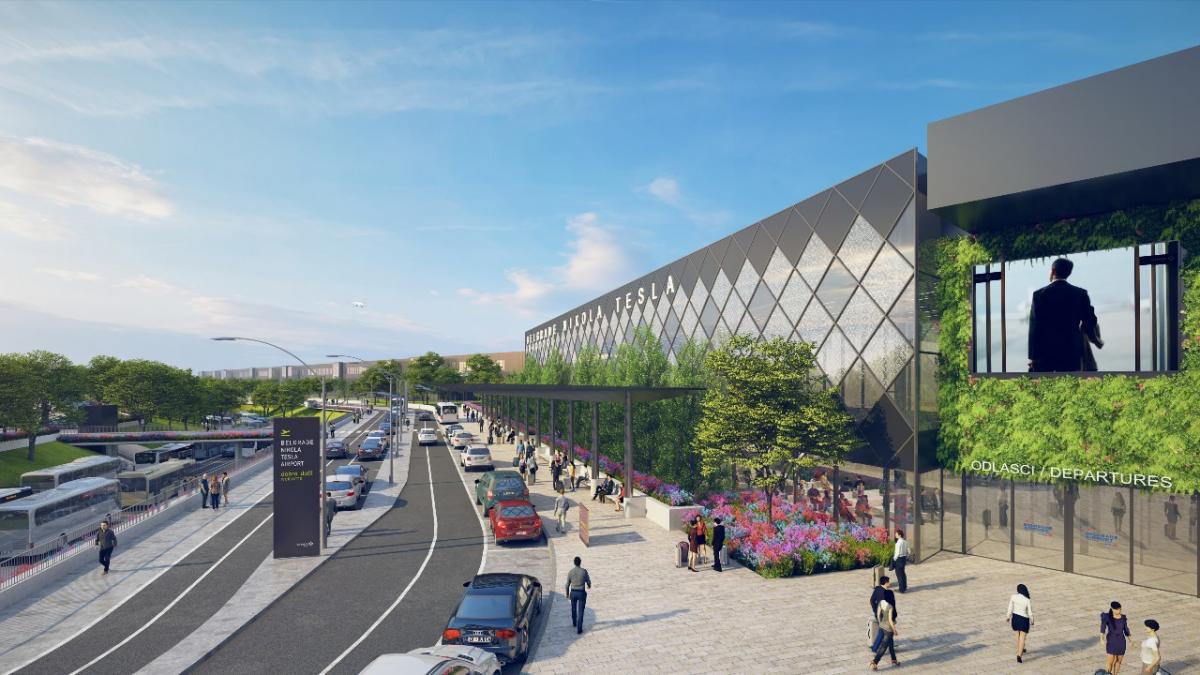