With the relaxation of Covid-19 restrictions for public gatherings in Serbia, Belgrade Airport decided to organise a meeting for local communities, to present the reconstruction and development plans for Airport Nikola Tesla, and to address the key questions and concerns from the inhabitants.

The meeting was organised by BA on 25th June 2020 in the premises of the local football club in Surčin.

Covid-19 prevention measures were strictly followed before, during, and after the meeting. Disinfection of the venue was performed before the beginning of the event, as well as after the participants had left the space. Seating of attendees was arranged at an appropriated distance from each other, while the use of face masks and gloves was mandatory throughout the meeting. The representatives of BA H&S team provided face masks and gloves for all attendees, as well as the hydroalcoholic gel at the entrance to the meeting room premises.

A total of 65 people were present at the meeting, including the Mayor of Surčin, Mr. Stevan Šuša.

Above: Disinfection of the venue prior to the event

Above: Preventive measures implemented during and after the event

The Chief Technical Officer Nicolas Brousse presented BA’s development plans and explained in more detail the individual components of the Project, particularly the inserted runway (BCIR), Pier C extension and new terminal space for security, check-in and additional commercial areas. The environmental aspects were also a major topic addressed, highlighting the importance of this subject for VINCI Group as a whole, as well as the commitment of the concessionaire to improve the practices implemented in Belgrade with plans for construction of the heating plant, waste water and solid waste treatment and the photovoltaic plant, to name just a few.

The boundaries of the Concession Location were also outlined, allowing to map the Project and show its place in the wider scope foreseen by the PDR and planned by the authorities in the future. A special accent was placed on differentiating between what is under the direct authority of BA and what requires collaboration with other relevant stakeholders, including, as the most important one, the Grantor of the Concession, i.e. the Government of the Republic of Serbia.

The map also outlines the area where potential expropriation of the land may occur by the Republic of Serbia for the purpose of implementation of concession related projects. 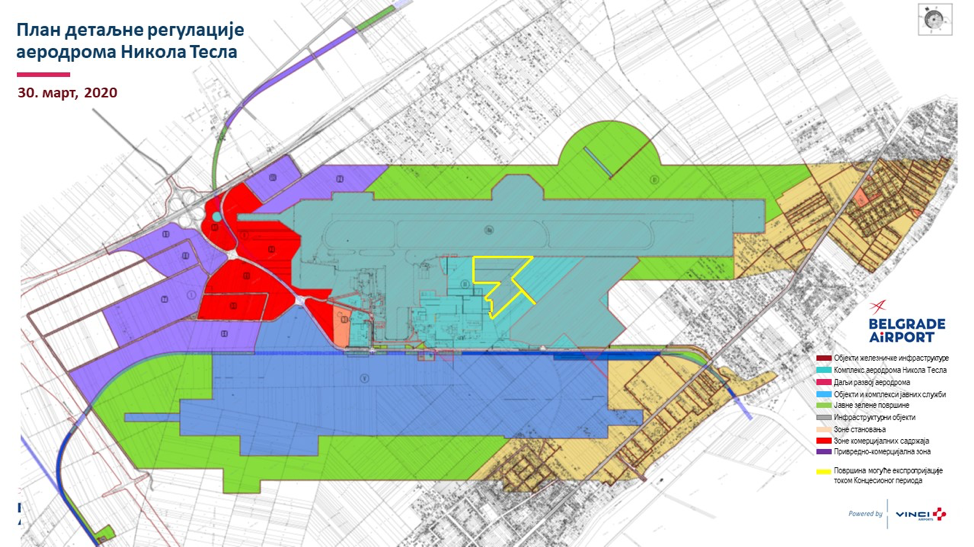 The participants were informed of all the communication channels they had available to contact BA and the commitment that each request and/or grievance will be responded to. Business cards with contact details for the questions, requests and grievances were handed out to all participants, with information on the dedicated phone number, email address and the postal address (+381608301596 and +381112094801, email: zainteresovanestrane@beg.aero and postal address Aerodrom Nikola Tesla Beograd, 11180 Beograd 59). The grievance form can also be found here.

The participants were also informed that BA will initiate the establishment of an Environmental Advisory Committee by the end of 2020, which will include representatives of all relevant stakeholders among whom coordination is needed to resolve some of the key environmental and social impacts of airport operations, which are not under the sole responsibility of BA. The Committee will include representatives of the Grantor (GoS), other relevant authorities and agencies such as the Civil Aviation Directorate, SMATSA, Air Serbia, the City of Belgrade and the Municipality of Surčin. Chief Technical Officer stated that BA would like to involve local communities in the work of the Committee and is in the process of determining how that could be arranged.

Above: Presentation of BA plans for reconstruction and modernization of Airport Nikola Tesla

The overall message sent by Belgrade Airport team was the desire to proactively engage with the local community as well as to provide support in resolving their inquiries and concerns. The meeting was very well received by most of the participants who appreciated that BA representatives reached out and made themselves available for questions and concerns. BA committed to keeping the local communities informed about the future activities. 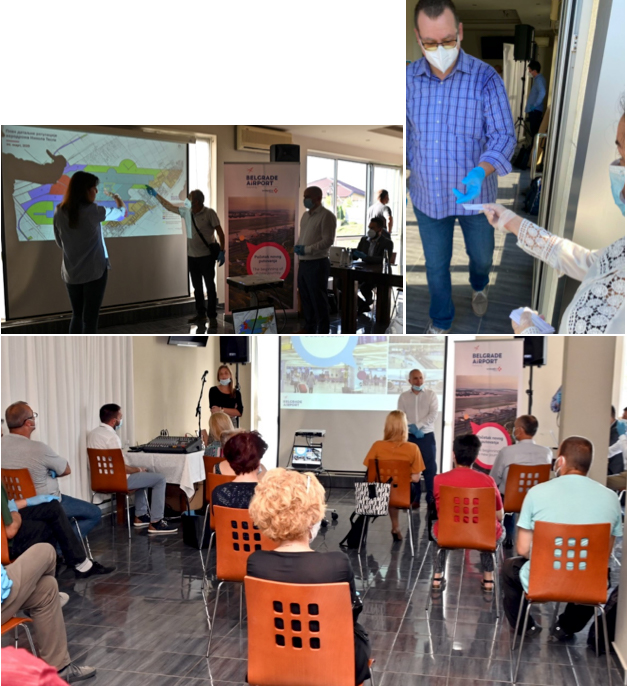 Above: Q&A Session and the distribution of grievance contact details